Nov02 Comments Off on Switch selection

As mentioned before, I want a switch setup that is the same in every room. Of course I considered loxone touch connected to the miniserver by loxone tree  But I did not like it because of two reasons: 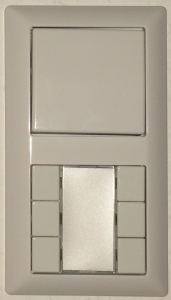 The idea is to control the main light of each room with 1. 6_1 (up) and 6_2 (down) will be used for the roller blinds. The four remaining switches can be used differently in all rooms dependent on the needs.

But, and there’s always a but, a CAT cable only contains 8 wires. Even though it’d be enough for 7 push buttons there is no wire left for the 6 red feedback LEDs and the RGB LED. Connecting all that would require 3 CAT cables.

That’s a price and effort I’m not willing to pay. It’d also mean that the miniserver has to provide 16 in/outputs for each room. This is what would make it really expensive. So I’ve decided to spend more of my time and come up with a solution that allows to connect my switch setup to the miniserver and to the backup circuitry at the same time while requiring only 1 CAT cable per switch.