A long time ago (2007 or 2008) I was developing firmware for Cell processor based systems. Most of the Slimline Open Firmware (SLOF) has been released and is also available in Fedora as firmware for QEMU: SLOF.

One of the systems we have been developing firmware for was a PCI Express card called PXCAB. The processor on this PCI Express card was not the original Cell processor but the newer PowerXCell 8i which has a much better double precision floating point performance. A few weeks ago I was able to get one of those PCI Express cards in a 1U chassis: 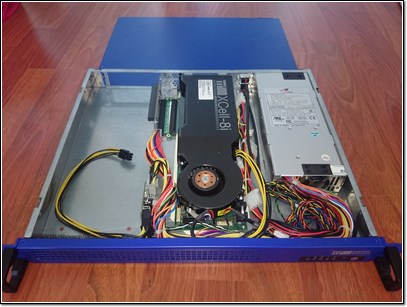 I can boot a kernel either via TFTP or from the flash. As writing the flash takes some time I am booting it right now via TFTP. Compiling the latest kernel from git for PPC64 is thanks to the available cross compiler (gcc-powerpc64-linux-gnu.x86_64) no problem: make CROSS_COMPILE=powerpc64-linux-gnu- ARCH=powerpc.

The more difficult part was to compile user space tools but fortunately I was able to compile it natively on a PPC64 system. With this minimal busybox based system I can boot the system and chroot into a Fedora 24 NFS mount.

I was trying to populate a directory with a minimal PPC64 based Fedora 24 system with following command:

Unfortunately that does not work as there currently seems to be no way to tell dnf to install the packages for another architecture. I was able to download a few RPMs and directly install them with rpm using the option --ignorearch. In the end I also installed the data for the chroot on my PPC64 system as that was faster and easier.

Now I can boot the PXCAB via TFTP into the busybox based ramdisk and from there I can chroot in to the NFS mounted Fedora 24 system.

The system has one CPU with two threads and 4GB of RAM. In addition to the actual RAM there is also 256MB of memory which can be accessed as a block device using the axonram driver. My busybox based ramdisk is copied to that ramdisk and thus freeing some more actual RAM:

System information from the firmware: