As mentioned by Alex the link was down. Two things happened:

For the second problem I don’t have a solution yet. For the not running raspberry pi there might be one:

The internal watchdog of the raspberry pi. It can be activated by loading the module, making sure it gets reloaded after a restart and installing the triggering software.

Configuration happens in the file

by uncommenting the following lines:

This is a very basic configuration and it will restart the raspberry pi in case the load is above 24 for a 1 minute interval.

Activation of the demon can be done like this:

Specific in my case is the additional option to check whether the file, that was not working as mentioned above, is written to on a regular basis. This can be achieved by adding the following lines in the configuration:

Each “file” entry specifies a file that will be checked by the watchdog whether it’s been touched and the “change” entry specifies the time that the file can stay untouched before the watchdog will not be triggered any more and by that lead to a system reset. The first file is touched at the start of the script, the second one at the end. So in case the script for updating the yield data is not called any more the system will be reset after 5 minutes. If the script is started, but does not finish properly it’ll be reset after 10 minutes.

Time will tell how reliable the watchdog is.

After a long break I’ve started logging the PVIs in my father’s house again. The main reason for reactivating the scripts was that the two PVIs have shown different yield numbers at the end of the day. Further investigation has shown that the internal clock of one of the PVIs was wrong, so at around noon the yield counter was reset, which of course led to different results. Anyway the graphs are online now. Currently the graphs are generated using google charts. Hints for an alternative are welcome.

Since my boss told me to reduce my overtime I’ve ordered a new toy to compensate the lack of work. 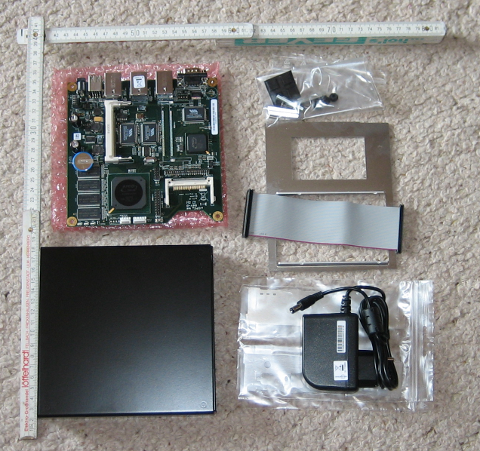 Currently I’m installing the system based on this description. Main idea is to get rid of the loud, big and of course power consuming solution I currently use as internet gateway and print server.

I’ve moved my printer to another room. Now it’s connected to my continuously running computer. But it’s constantly connected to power and is not really switching off. So I was searching for a solution to switch it of automatically. Using a µC would be nice, but the idea a the moment is to use a USB->serial converter and us the status pin RTS to switch a solid state relay. Today I’ve successfully tested the setup. First I tried with python, which in general is able to set the status of that pin, but unfortunately python is too “high”. During initialization and termination RTS is touched. And I don’t want to “shock” my printer with short switching pulses. But I’ve found this C-code. This allows to keep the state of the pin after termination of the program. This little piece of code exactly does what I need. I’ve added a diode before connecting RTS to the solid state relay to make sure that the relay does not see a negative voltage. I can not yet post a picture of that because my prototype is highly dangerous and I don’t want to provide any examples of dangerous 230V wiring on the net.

The next step will be to set up a cups backend that switches on and off the relay.