I’ve connected the Arduino pro mini (328/5V) to my pcb. Of course it’s not directly soldered to the PCB but using a connector, so I can replace the parts that get bricked during development. I’ve downloaded the blink example using something like this. Directly after flashing it worked, but once I disconnected the flashing adapter it stopped. After remembering, that I’ve to short my optional filter in case it’s not assemble it works.

… an ohmic load (Thank you Axel) shows the same behavior (spikes on Vout) as seen in the previous post. Fortunately I’ve spent some space on the pcb for an optional filter that has now become mandatory.

The spikes do not change with load or input voltage. I took a closer look and they are much less random compared to what the screenshot looks like. They’re expected transient responses to the switching. currently they’re around +- 1,5V which is too much.

Unfortunately the additional inductor and capacitor for the filter where not part of the part delivery I’ve received. The delivery date is changing once a week and is oscillating around 30th of march.

But in the meantime I still can try to get the arduino running. It has it’s own voltage regulator and an additional capacitor at the input, so the currently “dirty” Vout will not be an issue.

I’ve run the power supply under load. As you can see I’ve

The load was a florist wire that accidentally had the correct length to have a resistance of 10 Ohm (Just in case: R=U/I). So in addition to the resistance it also is an inductive load due to the geometric nature of florist wire.I did not want to unwind it.

Three things can be seen:

The result of the short test is that I’ve not noticed heating on the pcb or the parts even though I’m running the circuitry at the upper boundary of what it’s designed for. That’s good. For a real test with reasonably long duration (> 1 day) I need a fire proof environment, that also contains the designated housing, so that air turbulence can not cool down the pcb and of course a possibility to measure and log the temperature over time.

Unfortunately I do not have a nice load to check the behavior close to the 0,5A the power supply is designed for. But I have small light bulb that causes a load of around 30 mA. Running the power supply at this load for some minutes did not cause any noticeable increase of the temperature. That’s a good sign. I also tried a short cut between Vout and GND. Nothing bad happened. The MAX5033 detected the short cut and shut off, before trying to start again. After removing the short cut it went back to normal. This state I did not try for a longer time. The effects were visible on the oscilloscope and audible. Typically the inductors start to “sing” under such conditions.

My external power supply can only provide 20V, but I assume, that if everything works at 20V it’ll also run at 24V. So the next step before actually connecting the arduino is to run the power supply for an extended period of time (~ 1 day) with high load and 24V input.

After a long time I’ve reactivated my solder iron. Since I’ve done that without additional flux (apart from the content of the solder) the result looks accordingly. My next step will be testing the circuitry.

Surprisingly for me the soldering of the IC was the easiest. I assume, that the pads were perfectly sized for hand soldering. The resistors and small capacitors look horrible because I did not use tweezers. The large capacitor’s solder pads are a bit too small for hand soldering and the inductor needs a higher temperature because of the relatively high mass.

I also noticed that I’ve to improve my documentation. More information on the pcb, the layout and the circuit diagrams are required to simplify the soldering and reduce the time spent on searching the parts and their orientation. For example having the small dot that indicates pin 1 of an IC would be very helpful. Also the orientation of the larger capacitors and the exact location and size of the text on the pcb.

After ordering the prototype pcbs in China on Saturay they arrived on the following Wednesday. I even got one more pcb than I’ve ordered. The service is very fast and the price more than acceptable. So based on this single sample I can recommend allpcb.com. Apart from the silkscreen, the pcb looks good. But I’ve put exactly zero effort in it, so it’s OK. The picture shows the Arduino pro mini plugged in, but not yet soldered.

The next step is to solder the power supply parts (visible here on the very right) and the optional filter against ripple. After that the difficult part, soldering the oscillator, will be the next step.

With the help of Jonas as reviewer I’m one step closer to the solution that was missing in Switch selection. The first version of cancombase is finsihed.

The 5×10 cm pcb fits behind the switches in a double plug socket. The 4 pairs in the CAT cable will be used in the following way:

A description of the PCB is available here. It’s based on the arduino pro mini. Or an available clone of it.

The gap between the now introduced CAN and the loxone miniserver will be filled (most probably) with a rasperry pi that converts the CAN messages to UDP messages the miniserver is able to read.

Apart from reading switch states (maybe with double-click detection) and writing to feedback LEDs the next version of cancombase will also contain a temperature sensor. 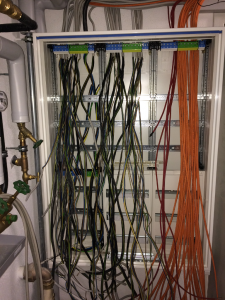 On the left you can see the power cables that go to the lights, plugs and roller blinds.

The red cables are the connections to the smoke detectors. Each room that is either a potential sleeping room or that is part of the escape path has a smoke detector (required by law). Additionally to the mandatory requirements they are connected on floor level and the floors are connected in the switch cabinet. In addition there is a connection between the three parts of the house. Currently they are all hard wired together. This might change in future to suppress the forwarding of alarms for some time. E.g. when testing smoke detectors in one part of the house it’s not desired to trigger all other smoke detectors.

As you can see there is still much space left in the switch cabinet, and that can’t be filled up only by simple fuses.

Nowadays, on floors that are partially constructed with wood, you’ve to install special fuses with spark detection . Those are 3 times the size of the traditional ones.

There will be the fault current protection switches that are nowadays mandatory for all three phases and not only for the bathroom.

There is my backup circuitry, that makes sure that, even without the home automation system, in each room the light can be switched and the roller blinds can be moved.

There will be a power supply for the backup system as well as for the home automation system.

And last but not least there will be the home automation system itself.

When building a house of course the question comes up whether, and immediately after that, how much home automation should be implemented. First step after deciding that I want home automation was the selection of a system. I decided to use loxone. There are reasons:

The home automation has the goal to be invisible for the user and offer all the functionality that you’re used to in a “normal” home as a base. If you enter a room there shall be a switch that will turn on the light if pressed. Only if you want to you can dim the light by holding the switch or by double clicking.

Also the basic setup should look the same in all the rooms. So I’ve decided for a combination of a normal sized light switch and a 6 pin switch below it.

The mechanical part of the house already exists: 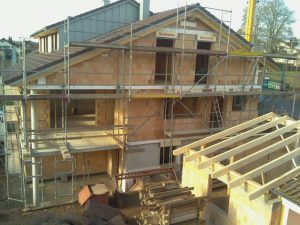 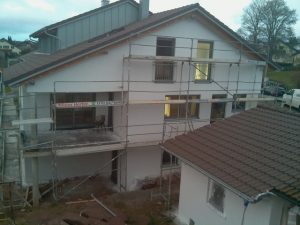 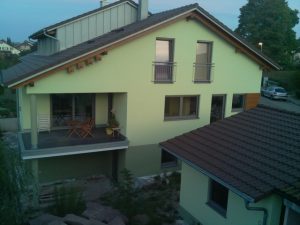 As mentioned by Alex the link was down. Two things happened:

For the second problem I don’t have a solution yet. For the not running raspberry pi there might be one:

The internal watchdog of the raspberry pi. It can be activated by loading the module, making sure it gets reloaded after a restart and installing the triggering software.

Configuration happens in the file

by uncommenting the following lines:

This is a very basic configuration and it will restart the raspberry pi in case the load is above 24 for a 1 minute interval.

Activation of the demon can be done like this:

Specific in my case is the additional option to check whether the file, that was not working as mentioned above, is written to on a regular basis. This can be achieved by adding the following lines in the configuration:

Each “file” entry specifies a file that will be checked by the watchdog whether it’s been touched and the “change” entry specifies the time that the file can stay untouched before the watchdog will not be triggered any more and by that lead to a system reset. The first file is touched at the start of the script, the second one at the end. So in case the script for updating the yield data is not called any more the system will be reset after 5 minutes. If the script is started, but does not finish properly it’ll be reset after 10 minutes.

Time will tell how reliable the watchdog is.